The internet has once again been taken by storm via – you guessed it: an adorable kitten video. The absolutely heartwarming video, posted on Reddit last week by user u / catnip4sale, has obtained over eighty thousand upvotes and over one thousand comments.

Reddit users worldwide have fallen head-over-heels in love with a brave momma named “Miso” and her litter of newborn babies.

This popular video was posted in a fittingly-named group called “a subreddit for cute and cuddly pictures.” This group describes itself as “a group for things that make you go AWW!”.

The video, posted on May 9th, shows a beautiful, short-haired stray carrying her newborn kittens, one by one, through catnip4sale’s apartment window and into her home.

“I met a friendly stray about two weeks ago, gave her food and water, and showed her how to get to my bedroom window. Today, she brought me all 4 of her newborn kittens. ” – u / catnip4sale

The kittens were brought in following a terrifying storm. Many Reddit users have expressed their surprise that this momma kitty would risk her own comfort to get her young babes to safety. But who is this brave momma, and to whom does she belong?

This momma kitty, since given the name “Miso” (as in the soup), has been spotted around u / catnip4sale’s apartment complex for several months now.

Neighbors say that the previous owner of u / catnip4sale’s unit was evicted and a so-called “nightmare tenant” who was not permitted to have pets.

This previous tenant was evicted from the unit but did not take Miso with them. Since that time, she has lived on the streets, though she has spent much of her time in the safety of the complex over the past few months.

Miso quickly became friends with the unit’s new owner, u / catnip4sale, as she frequently returned to her old stomping grounds. As the two began to form a bond of friendship, u / catnip4sale would start to feed and offer water to Miso.

They also taught this momma kitty how to find and access u / catnip4sale’s bedroom window.

Two weeks later, Miso went missing for a few days during a horrible storm. Once the skies began to clear, Miso’s human friend was delighted to discover that this loving stray had given birth to a litter of kittens. How did she discover this?

As shown in the video, Miso brought each of her newborns, one at a time, through u / catnip4sale’s bedroom window – out of the storm and into the home of someone she has grown to trust. There were four babies in total. 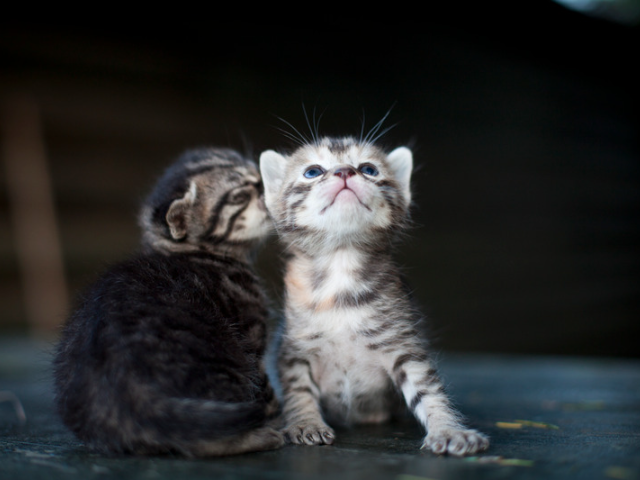 The kittens (and momma) have since been taken in by a friend of u / catnip4sale’s who has experience raising newborns. Their new caretaker reports that all of the kittens are happy and healthy.

Once they are old enough, the kittens will be taken to the vet for vaccines and health testing. They will also be spayed (or neutered) once they are of age and will be adopted to safe, loving homes.

Reddit users are enthralled with the little family and have left many comments showing their love and support: “This made my day. Amazing, ”said one Reddit user, while another said,“ bless you for being her safe place. ” One user wrote a beautiful poem about the experience from Miso’s point of view:

“I bring you my children – is better, you’ll see; too much house to share here for just you ‘n me; too quiet alone – there is harvest to reap! My kits work the best when you’re trying to sleep – ❤️ “- Reddit user u / SchnoodleDoodleDoo

Once the kittens have been placed in their new homes, Miso will be officially adopted by u / catnip4sale and her family (including a new kitty sibling for Miso). She will be allowed to live in a safe, happy environment for the first time – and in the home that she grew up in.