It is I, Forrest Wisewhiskers, here again to impart feline knowledge upon your curious minds. And today, I feel the need to discuss cat idioms. “Why,” you ask? As usual, my parents’ silliness has inspired my post, this one because they think it’s funny to comment, “Look what the cat dragged in,” when I haul my favorite bird toy around the house.

(A quick side note about the bird: it looks much like my mockingbird nemesis, so I like to carry it around as a soother after I’ve seen said bird outside.)

The parents’ comments got me thinking about how the way of cats is so excellent, we’ve inspired humans in their writing endeavors since you people started doing such things. So, it’s no surprise there are so many cat-related phrases peppering human language. And it’s times like these my curiosity comes in handy because, in my infinite feline wisdom, I can tell you the origins behind many of these cat idioms.

Are you ready to be amazed by the power of kitty knowledge and the feline ability to scour credible sources? Good, then let us begin. 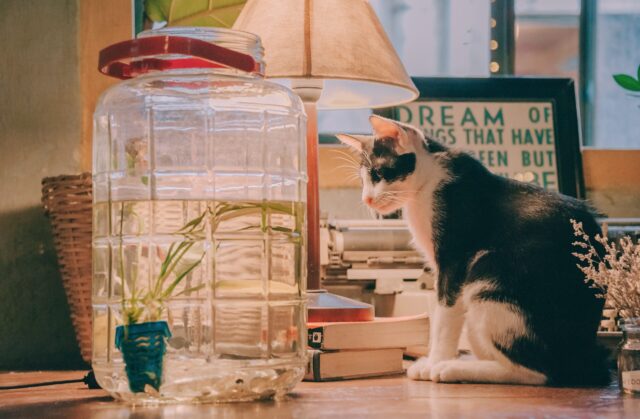 The Origins Behind Your Favorite Cat Idioms Revealed

The Cat’s Meow and The Cat’s Pajamas

These cat-related phrases came to our lexicon thanks to the hip cats of the Roaring Twenties who were ready to throw away old notions for the new, modern, and fun. And one way they expressed this need for the latest was in nonsensical phrases involving animal traits, like the bee’s knees and the cat’s meow. These silly phrases were meant to show high praise for what the cool cats of the 20s found stellar.

It’s also thought these phrases gained popularity because flappers were called ‘cats’ for their fabulous style and wild behavior. And in their in-depth look at the two cat idioms, the fine cats of A Tonk’s Tail revealed the idea of ​​women wearing new-fangled pajamas to bed was a provocative and innovative one. So, something as modern and hip as a flapper and her new jammies was deemed “the cat’s pajamas.” Cat Got Your Tongue?

Asked of someone when they’re unusually quiet or suddenly have nothing to say, this cat idiom has no definitive beginning. But an article that appeared in Clinical Infectious DiseasesVolume 46, cites the Oxford English Dictionaryreporting the “earliest written example of the phrase” appeared in 1911. Other scholars theorize the idiom could have originated from any of these long-gone situations:

Let the Cat Out of the Bag

The first printed mention of this cat-related phrase was a book review found in London Magazine in the mid-eighteenth century. In this review, the reader complained that he “wished that the author had not let the cat out of the bag.” This means the phrase had become common enough to make it into everyday vernacular, putting its origin well before 1760.

Etymologists and scholars suppose the phrase finds roots in the medieval period because of a scam run by marketplace vendors, with Reader’s Digest explaining, “When someone would purchase a pig, the vendor would sneak a cat into the bag instead, cheating the buyer out of the higher price for a pig. ” 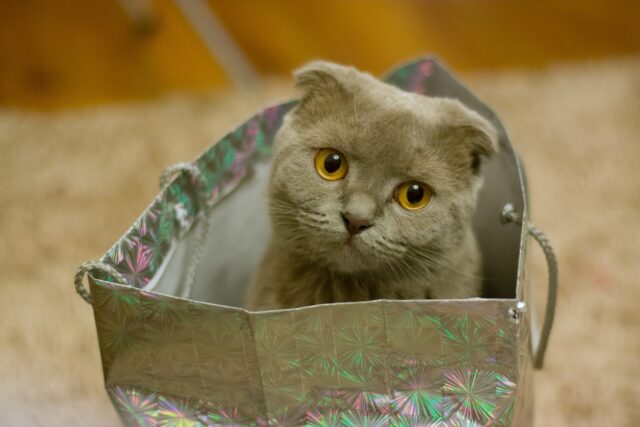 For this phrase’s origin, we turn to the Library of Congress, where it’s reported a version of the cat idiom first appeared in writing in 1651 when mentioned by British poet Henry Vaughan in his collection of poems Olor Iscanus. From that first penned appearance, the phrase turned up time and again in the musings of writers. But the actual beginning of the phrase remains unknown.

Scholars have offered these theories:

Look What the Cat Dragged In

No matter how much digging this cat did on the phrase; I could not unearth a definite origin. But Idioms Online suggests that the phrase’s first appearance in writing came in the early 20th century. Even though we can not pin down the start of the phrase, we certainly know the why behind it, as felines tend to drag their bedraggled kills inside to give them as gifts.

Have you ever wondered why kitties like to present you with hunted gifts? Find out in 7 Odd Cat Behaviors, Finally Explained.

If you’ve spent any time around cats, you certainly get the meaning behind ‘playing a game of cat and mouse.’ I will admit, I enjoyed toying with mice before dining on them in my youth, but now I reserve my energy for the back and forths with my mockingbird nemesis. But I digress. As to the idiom, even though cats have been playing with mice before eating them since cats were cats and mice were mice, etymologists have not yet tracked down the origin of the actual phrase.

TheIdioms.com suggests, however, “This phrase has been around for hundreds of years, tracing back to 1675 and even being used in the Grimm Brothers’ fairy tale ‘Cat and Mouse in Partnership.'” 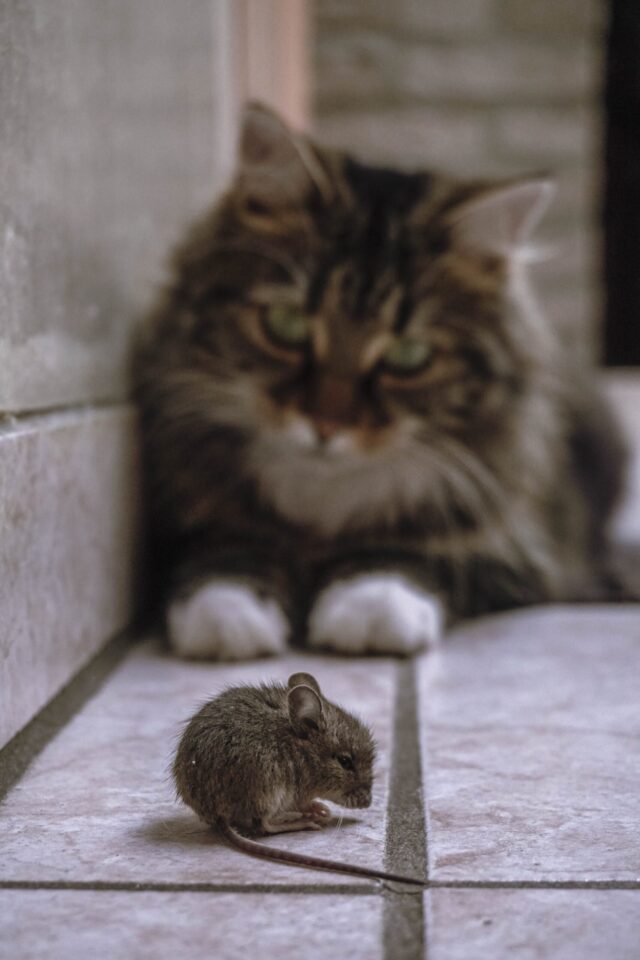 While the Cat’s Away the Mice Will Play

Naughtiness abounds when a cat or any other authority figure turns their back. That real and metaphorical mice will misbehave when no one is watching is a thought long expressed. In fact, the Random House Dictionary of Popular Proverbs and Sayings reports this cat idiom finds origins in the Latin proverb, Dum felis dormit, mus gaudet et exsi litantro (‘When the cat falls asleep, the mouse rejoices and leaps from the hole’).

A French phrase from the early 14th century also captures a similar sentiment in chat na rat regne (‘Where there is no cat, the rat is king’). The phrase as we know it appeared in English around the same time. And the Random House collection notes the phrase was “used by Shakespeare in ‘Henry the Fifth,’ in 1599.”

To ‘bell the cat’ means to attempt a dangerous undertaking. Now, maybe this does not sound dangerous to you, but imagine trying to hang a bell around a cat’s neck if you’re a mouse. Suddenly it sounds more perilous a task. And in a fable attributed to the ancient Greek storyteller Aesop, a group of mice agrees. Someone must bell the cat for the good of all the mice, but the mice can not decide who among them will do the deed.

Can you blame the mice for fearing the cat? They know the power of the stalking cat, easily recognizing the 7 Traits That Make Your Cat A Fearless Hunter. 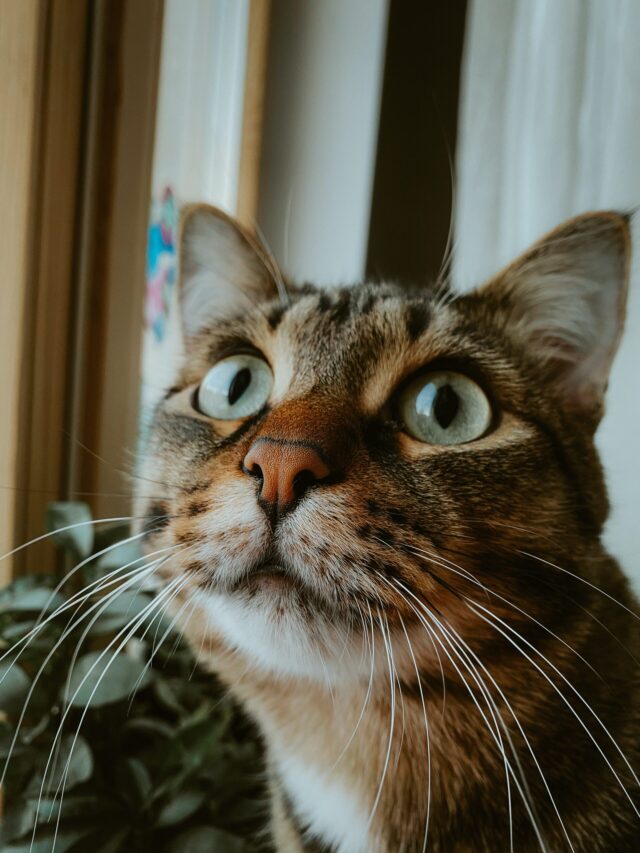 And there you have it, the origins behind your favorite cat-related phrases. Hopefully, I’ve satisfied your curiosity. Now, it’s time to satisfy your feline friend’s appetite, so do not forget to feed the cat.