33-year-old Renate Balbuena of Charleston, SC, was on vacation in Tanay, Rizal, Philippines, when he was faced with the shock of his life. Balbuena was behind the wheel of his car, speaking into a GoPro camera he’d set up on the dashboard when a large Philippine Serpent Eagle crashed through his passenger side window.

The aspiring vlogger was attempting to film his first-ever YouTube video. It’s hard to tell who was more stunned: Balbuena or the bird.

“I was in shock for a few seconds but I knew it would not hurt me,” the young man said later. “I was just trying to understand why on earth a bird would fly into my car!”

The eagle’s left wing was bleeding and missing a few primary feathers. It is unknown whether the bird was injured during his crash landing into the car or at some point before. “I’m not an animal expert, but it looked like something had bitten it,” Balbuena said.

“I closed the window so he did not injure himself more and grabbed a towel I had in my backseat to wrap him up. I put it on my legs and went home to get in touch with my cousin, who is a vet. My cousin prescribed some medicine for it whilst I cleaned the wound and tried to feed it. ”

That’s right. Not only did Balbuena take the bird somewhere safe to recover, but he also spent the next four days of his vacation hand-feeding and nursing it back to health! 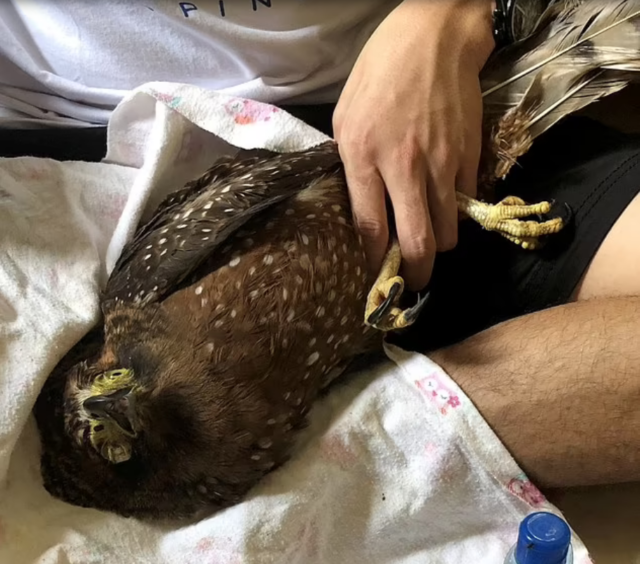 At first, the bird refused to eat, so Balbuena scrounged up an assortment of meat, fish, and fruits. Finally, it started eating, an excellent sign.

“I was so happy and excited to see him eating,” Balbuena said. “I love animals so much – cats, dogs, chickens, you name it! Sometimes my mom hates me because I adopt all kinds of animals. ”

When it came time to release the bird back to its natural habitat, Balbuena’s fiancee helped him capture the moment using a GoPro, her phone, and a drone.

“When I tossed him I said, ‘You’re healed now, fly high and free my friend. God sent you to me and you could be my genie in a bottle. Please help me become successful! ‘ I felt goosebumps after he left. ” Balbuena has had a difficult few years, with his father and baby sister passing away in 2019 and a stressful move to the United States. He hopes the eagle is a sign that things are going to turn around for him.

“I work seven days a week to provide for my family back home,” Balbuena said. “I’m a man with hard falls, but I’m still standing tall. I think that your positive actions, combined with positive thinking, always result in success. ”

You can help support this kindhearted animal lover by following his YouTube channel, LittleBandido.

Watch the full video below.